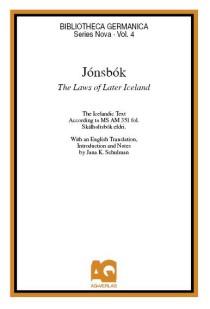 The Laws of Later Iceland: Jónsbók

Bilingual Edition (Icelandic/English)
The Icelandic Text According to MS AM 351 fol. Skálholtsbók eldri.
With an English translation, introduction and notes.

After Iceland had submitted to the Norwegian king, Hákon Hákonarson, and his son Magnús in 1262-1264, the law of the Icelandic Commonwealth Grágás was abolished and superseded by Járnsíða in 1271. Icelanders, however, disliked this mainly Norwegian law as it did not pay enough attention to Icelandic conditions. So the lawspeaker Jn Einarsson (d. 1306) brought a revised law code, one that now carries his name, from Norway to Iceland in 1280, to have it accepted by the General Assembly in 1281.

Laws of Later Iceland: Jónsbók opens the window to a landscape both unknown and familiar (in its exploration of some legal issues that concern us even today).  A late thirteenth-century legal text, Jónsbók's chapters focus on land use, tenancy, personal rights, farming, maritime law, marriage and family law, and inheritance, in addition to poor law and theft law.  In this translation appear many fascinating details:  how do I prove that I have the rights to a whale?  What mark can I claim to indicate my animals and where, according to the law, must I mark them?  If my sister marries before me and receives more in her dowry than I end up getting, what are my options?  If I own a certain amount of land and chattels, how much will I have to contribute for support of the indigent?

The Laws of Later Iceland is the first translation into English of any Jónsbók manuscript. It provides the first edition of AM 351 fol. The edition is a diplomatic one so that linguists can use it as well. Since there are already Ólafur Halldórsson's critical edition (Copenhagen, 1904) that uses AM 351 fol. as its base and Chr. Westergård-Nielsen's  facsimile of AM 351 fol. (Copenhagen, 1971), this manuscript will be one of the most accessible for virtually any audience, existing as it does as the base manuscript of a critical edition, in a facsimile, and as the basis for a diplomatic edition and translation.

Jónsbók has always attracted readers both because of its comprehensiveness and because of the very material itself. Jónsbók specifically drew scribes to copy the book as ownership allowed more people to know their law intimately and contributed to status. The book has been preserved in over 260 copies, testifying to its popularity; some sections remain in force even today. Unfortunately, Jónsbók was not included in the German series Germanenrechte, so that prior to this edition and translation, there has been only one translation published, that into Danish in 1763. It is fitting to have an English translation of Jónsbók so that the text will be accessible to a wider range of scholars. Not only will this translation of Jónsbók complement the work done by the translators of Grágás (Dennis, Foote, and Perkins, Winnipeg, 1980-2000), but it also will complete the history of medieval Iceland's most important laws.


Jana K. Schulman studied at Barnard College and at the University of Minnesota, where she received her Ph.D. She taught Old English and comparative epic at Southeastern Louisiana University, and is presently an Associate Professor at Western Michigan University where she teaches Old Norse and Old English. She has previously edited The Rise of the Medieval World (Greenwood, 2002) and published an article on women in the sagas of the Icelanders.